Back On the Pitch! 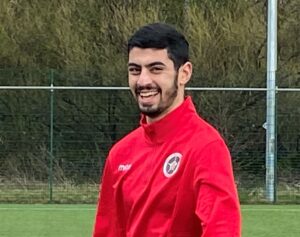 HM Academy are back on the pitch and it feels great. On Monday 29th March the nationwide restrictions on outdoor team sports was lifted and the players from the academy got the chance to meet again and train.

It’s been a long year for the IHM players so far. Since the beginning of January they have been working daily with the coaches online, studying and keeping fit in preparation for being back out training. Over the last 12 months the global pandemic has really hit the football industry, with stadiums empty, games cancelled and leagues even suspended. All this has impacted on the international academy here in Manchester, whilst we remained open and working with the players from a distance, we couldn’t do what they and we love the most and get out on the pitch.

Tremendous credit should go to all our players and coaches who have worked fantastically not only since the lockdown in January, but over the past 12 months, staying engaged with the programme, developing and reinventing the programme online. The players have been put through their paces online with a number of fitness sessions from the coaches, have learnt so much with so excellent guest sessions from David Lowe, Neil Mellor and Jon Macken and enhanced their knowledge so much with the increased studies over that period of time.

But now we are back, and the players looked stronger than before as they took to the pitch on Monday. It was fantastic to see the enthusiasm and how eager not only those players were, but those who have very quickly arranged their travel to come to Manchester to join us. After a short quarantine spell, we will have the whole squad back where they belong by mid-April.

Director Mick Brennan Said “it’s been a long time coming but it’s a day each one of the players has been counting down to. It’s great to see them out on the pitch again, the fitness and enthusiasm for playing was at an all-time high, it was obvious a number of the players have really worked well with the online sessions over the past few months to keep in top shape. It’s all a bit frantic at the moment, all playing at 100 miles an hour to do all they can, but that will settle. We now just can’t wait for all the other players to join us. I’ve been delighted by how quick everyone has arranged things to return. After the events of the last few months you’d have though some may have been very cautious about travel, but I think by Mid-April we will have all the players here, which is tremendous. Full credit too to the players who have all took on board the new rules and precautions around training to ensure everyone is safe, it is a little different and they have taken to it well to keep their team safe. We are looking forward to a great end to the season now out on the pitch”